“The Journey is the Destination” is a Gala film being screened tonight, 6:30pm, at Roy Thomson Hall.  The frank biopic is based on the journals of Dan Eldon, a photojournalist, artist and activist who was killed documenting famine and war in Somalia.  He was just 22.  The Windsor Arms Hotel is featuring a display of art and photography that was inspired by Dan Eldon.  Some of the art portrays a vibrant and colourful view of Africa while some of the photography is more bleak and emotional. The art is available for purchase.  Proceeds go to the Creative Visions Foundation, a charity started by Kathy Eldon to honour her son. The organization uses media and the arts to bring about meaningful change in the world.

Kathy Eldon, is also one of the film’s producers. Canadian Marty Katz and Kweku Mandela, grandson of Nelson Mandela, are also part of the producing team. 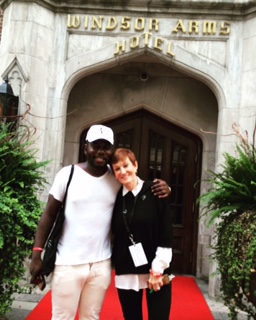